While debate over the sites: use, benefit, monetization, and imposing threat on the major network television environment will continue to inflame, one thing is certainly true. YouTube’s impact is undeniable, and a statistical anomaly.

-2 billion pageviews/day,  nearly double the prime-time audience of all three major U.S. television networks combined. (ABC, NBC, CBS)
-94 percent of AdAge’s top 100 advertisers advertised on YouTube. Sees more than 24 hours of video uploaded every minute (and growing)
-3rd most visited website overall
-19 seconds, the length of the first video uploaded to YouTube, of co-founder Jawed Karim at San Diego Zoo.
-Feb. 14, 2005 The date YouTube registered its domain name.
-April 23, 2005 The date the first video was uploaded to YouTube.
-1.96 million The number of times the first video has been played, as of midweek.
-185.39 million The number of times the most popular video on YouTube, Lady Gaga’s “Bad Romance,” has been played. (CRAZINESS, SERIOUSLY)
-252 In seconds, the average length of a YouTube video, according to Sysomos, a Toronto firm (yay Canada) that analyzes social media.
-6.6 The factor by which YouTube’s number of monthly video streams served (4.67 billion) exceeds that of Hulu (707.5 million), the second-place site in that category.
-$1.65 billion In dollars worth of stock, the amount Google paid to acquire YouTube in November 2006.
-51 The number of languages into which Google’s automatic speech recognition technology can translate YouTube videos and create captions.
-2.14 million The number of subscribers to NigaHiga’s channel of Asian-themed comedy videos, the most subscribed to on YouTube.Advertisement
-$30,000 The amount the video “David After Dentist,” of an incoherent little kid in the back seat of a car, has earned for its uploader through an ad revenue sharing
-14,600 The number of videos that comes up when you search for “kittens” on YouTube.
-3,820 The number that comes up when you search for “trampoline accidents.”

Bottom line: YouTube, and online video is here to stay. And will continue to play a prominent role not just in the entertainment possibilities of of our media machine, but as a democratic platform for people to express themselves creatively, independently and personally.

Happy birthday YouTube. Scary to think of where you’ll be at 10. Geez!

Leave Your Lizard Brain Behind

AMYGDALA (uh mig’ dull uh) Code name: “The Lizard Brain.” This little almond nugget, that sits on top of our brain stem, is the location … 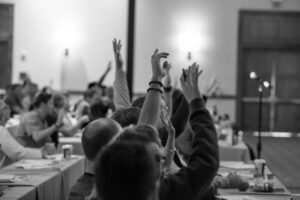 I WON’T HIRE YOU. (EVEN IF YOU WASH YOUR HANDS.)

I won’t hire you. Even if you stop touching your face and start washing your hands. In fact, I wouldn’t hire you to clean my …

I WON’T HIRE YOU. (EVEN IF YOU WASH YOUR HANDS.) Read More

“Enthusiasm is one of the most powerful engines of success. When you do a thing, do it with all your might. Put your whole soul …